Things You Should Know When Buying a Moffett Forklift

THINGS YOU SHOULD KNOW WHEN BUYING A MOFFETT FORKLIFT 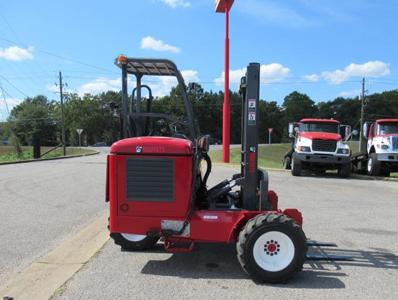 Did you know forklifts have been around for 100+ years? The machine that has become essential for storage in warehouses as well as being used in almost every facet of the modern transportation of goods. It had its humble beginnings in the early 20th century with manually powered hoists that were used to lift loads. The real use of powered lifting became essential because of wartime scenarios starting with World War 1 when a shortage of manpower led to the tractors being modified to lift weights. The next boom in the production of the forklift came in World War 2 when it was used extensively for the lifting of supplies and cargo.

Forklifts Piggybacking, Are You Kidding?

No, we are not. Currently, there are two types of forklifts in use in the transportation and storage industry – the conventional forklift and the Moffett or also known as the piggyback forklift. Before we go on to describe the Moffett let us describe the current functioning of the conventional lifter. The forklift can be considered a seesaw for all intents and purposes. The forklift has a counterweight at the back and the driver and main body can be considered the pivot the forks being the other end that handles the weight. So when a weight is lifted the counterweight balances the load and allows for the lifting and placing of cargo on storage shelves or transport trucks. The downside of this is that it makes forklifts heavy and not easily transportable. Plus picking up a load greater than the counterweight can cause the forklift to topple forward and cause injury to the driver.

They say invention is the mother of necessity and that cannot be put more aptly when it comes to the development of the Moffett. The Moffett can be considered as a portable forklift hence the name it got – the piggyback forklift.  Its lighter weight means it uses less fuel and no counterweights to get the job done. Instead, it has a movable mast and hydraulic stabilizers, when it lifts a weigh the hydraulic stabilizers become the pivot and hence allow for weights to be lifted. The unit can be made to fit and carried around by truck usually a flatbed one.

This is usually a question that comes up and there are pros and cons to each one let us look at them. If you are searching for a new forklift for sale it is understandable as a new thing is new it hasn’t been used and it will last a couple of years depending on the use. Generally, new forklifts have essentially no repair costs associated with it. Also, new ones usually have a low maintenance requirement, the regular maintenance at fixed intervals should keep it running for a while. However, the initial cost of it is much greater as compared to a let’s say a used one. The thing is if you buy a used one from a dealership they usually make sure that it is refurbished and if it is done by their expert staff then you might have a deal on your hands. The initial cost is less and if you buy it from a trustworthy dealership such as Bobby Park Truck and Equipment.  They offer a 3S outlet - sales, service, and parts - you can be assured that it will work smoothly for a couple of years depending on how you use it. So if you want to make sure that you save money initially and afterward a refurbed forklift would be the best choice. So your search should be used forklifts for sale near me.

Truck and Moffett – A Match Made in the Book of Logistics

As we mentioned that the Moffett is transported easily. A rig usually a flatbed can be modified to carry these piggyback forklifts. It forms a complete transportation unit; the forklift allows for cargo and goods to be loaded on to the truck and the truck can carry the cargo and lift to wherever it needs to go. It also allows for the unloading of goods at any point. Hence the new search should be flatbed truck with  piggyback forklift for sale.